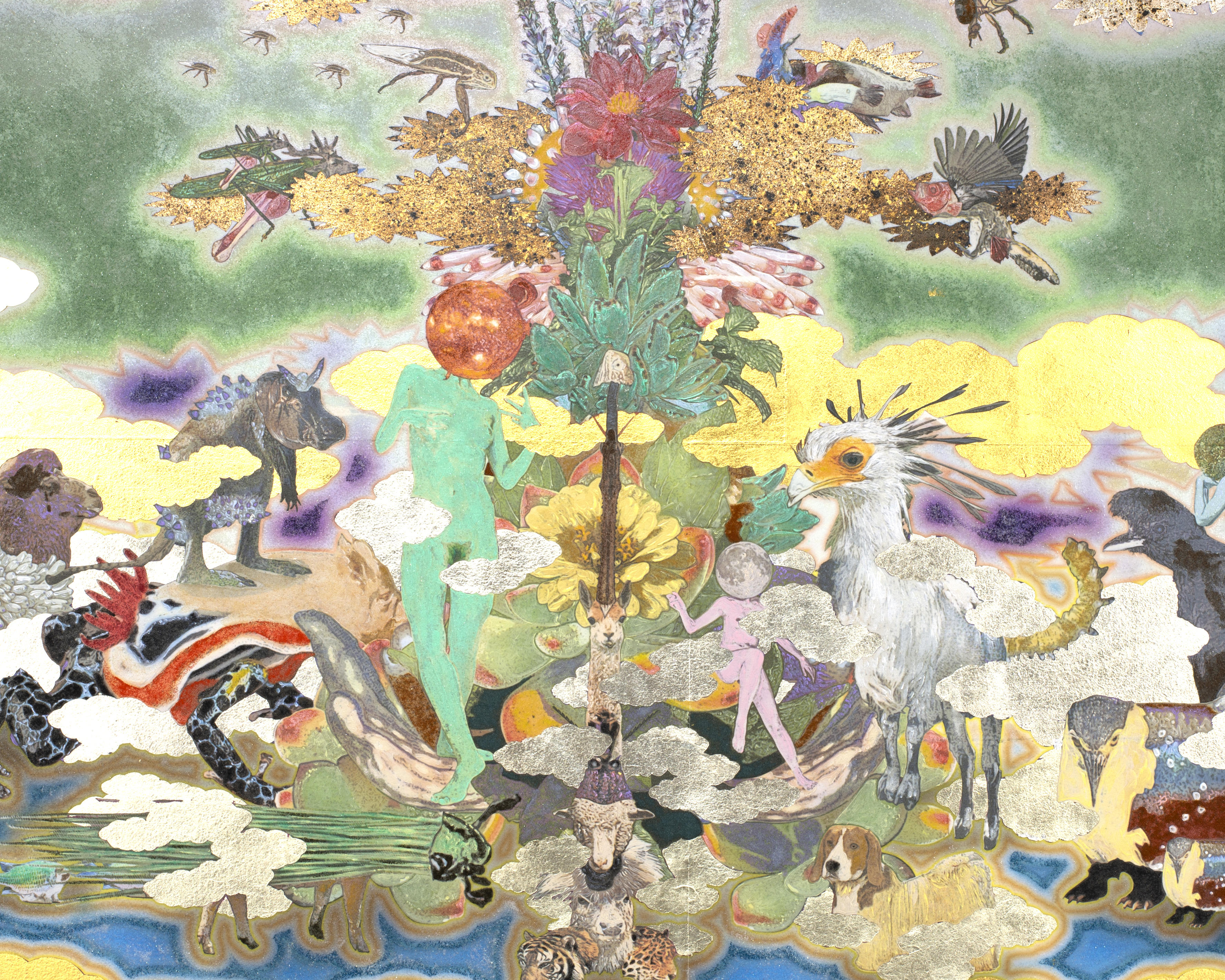 January 2017 saw the birth of the first chimera (i) between human and pig. Internationally acclaimed life-sciences research magazine Cell announced the successful creation of an embryo that carried both human and pig DNA at the American Salk Institute for Biological Studies. Later, in 2019, a pig carrying monkey DNA was born in China. The goal of such research is the creation of animals that are closer to us human beings, in order to use their bodies to cultivate organs for transplantation. The character of the chimera, once a feared monster belonging to the world of mythological stories, might soon serve humankind as an organ cultivation device.

Chimeras are also arguably one of the main elements of Masatake Kozaki’s “TOUGEN” (lit. “earthly paradise”) paintings, a series he began in 1999. Based on a style reminiscent of Nanban folding screens or the “Scenes in and around Kyoto” folding screens, Kozaki’s paintings include chimera in vast variation, from nude women with bird heads to beings that combine human-made things like satellites or folk craft items with insects, flowers and other animals and plants. It appears to me that what Kozaki’s chimera may have in common with those created in laboratories.

Among the works that Kozaki references in his art are old Hyakki Yagyō scrolls showing uncontrolled hordes of folklore monsters (1336–1573), paintings by Dutch painter Hieronymus Bosch (1450–1516), as well as the before-mentioned folding screens of “Scenes in and around Kyoto” (16th century) and Nanban folding screens (late 16th–17th century). These artworks picture ghosts and superstitions, rich customs and cultures that were the result of human creativity and desire in pre-industrial times. In Kozaki’s paintings, satellites, rockets and other industrial machinery created thanks to advanced technologies are added to that world as heterogenous presences. What is highlighted by this interesting co-existence and the chimera that come out of it? Humanity’s craving for more wealth and more abundance, a desire that has been largely unchanged in the last several centuries, has materialized itself in all possible manners through science and technology of the industrial age. Are Kozaki’s chimera not representations of a synthesized human nature that expresses itself differently in each era? The chimera created in laboratories, too, are a manifestation of human desire (for eternal life), expressed in the grotesque form of living organ cultivation devices.

Kozaki, a native of Japan’s Fukushima region, might foresee the arrival of a strange “Tougen,” a peculiar earthly paradise, at the moment when human desires are met through science and technologies like nuclear power. At any rate, our current world, a world that includes artificially created human-pig chimera, continues to nudge ever closer to that fantastical “Tougen.”

Having re-appreciated them in light of the current corona pandemic, it appears to me that Kozaki’s works may actually pursue a new kind of reality.

(i) In biology, the mixing of cells with different genetic information within a single organism, or such an organism, is called chimera. The name is derived from chimera of Greek mythology, a hybrid creature with the head of a lion, the torso of a goat, and a venomous snake as its tail. In recent years, many hybrid creatures in pop culture, from books to movies and videogames, have sometimes been referred to as chimera as well.